Old Orchards And Their Habitat 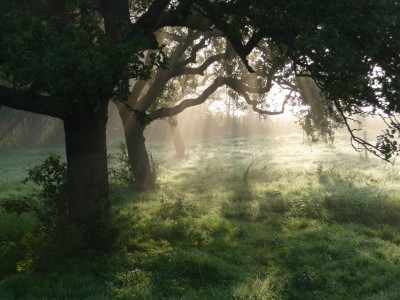 Old orchards of full sized trees are one of the most traditional elements of the Gloucestershire countryside, providing vital habitat for flora and fauna alike. The old trees are a home to hole nesting birds such as little owls, while the deeply creviced bark provides protection for many invertebrates, which in turn feed the bird life.

The unploughed grassland beneath the trees has been managed for generations by grazing sheep and occasional cutting for hay, and is rich is wild flowers and grasses of all types. On our own orchards initial surveys have shown over 50 species in the grassland and over 20 species of lichen on the trees. Bird life is also encouraged by the placing of bird boxes and bat boxes throughout the orchard.

Because of their significant contribution to biodiversity, landscape character and local distinctiveness, old orchards have been identified as a priority habitat in the National Biodiversity Action Plan, and are a great focus of environmental interest. The Noble Chafer, an endangered beetle, whose habitat is the decaying heartwood of fruit trees has been found in certain orchards in the county. All old orchards in Gloucestershire and neighbouring counties are now being surveyed for the Noble Chafer by The People’s Trust for Endangered Species.